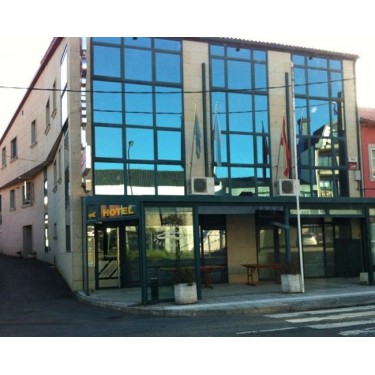 This young family hotel opened in 2001 with 14 rooms and later, in 2005, 16 more were added mansard style. The rooms are fully functional and are tastefully decorated in a traditional but with a touch of modernism making the same area cozy, warm and comfortable rest, to enjoy their stays. All are equipped with private bathroom, television, wardrobe and desk. Rooms have two double beds. Also triple and quadruple.

With a total of 30 rooms it can accommodate more than 64 people.
This hotel allows entry to guests dogs (after consultation and notification conditions on the reservation).

Amazing location of this new and modern hotel in an important industrial area, Lalin, Capital of Deza, which you will find a friendly and familiar.

The town of Lalín, capital of the municipality and head of the Region of Deza, is a reference point in the map of communications of Galicia. Indeed, this situation privilejiada in the center of the autonomous community contributed in recent years to takeoff as shopping and livestock services a wide area. Thus, even though the villa was only in 1960 that a small population center, consists of several areas of buildings along the Ourense-Santiago and Lugo-Pontevedra road, currently already it hosts 8,338 residents. . On the other side the villa offers its neighbors Lalin today all services you can find in a big city, both in health, and educational, sporting, recreational and cultural.

This wide range teaches that the small town of Lalin is immersed in a profound metamorphosis that is to make it the great capital inside Galicia.Una signals identity of the town of Lalin is the parish church, which began to build in 1888 being mayor Benito Calviño and was completed in 1915. nearby is the monument Lalín chosen by the people to the famous astronomer and mathematician Ramon Maria Aller. The work of sculptor Asorey, looks at its base the legend "science, humility and virtue", which summarizes the life of this illustrious son of Lalín.
Also Asorey is the monument to the aviator Joaquín Loriga, located in the Park Loriga, which was opened in 1933 and represents a star on earth as a Latin cross, along withthe figure of the aviator and two handshakes plane, symbolizing the union between the peoples of Spain and Filipinas.Si have to travel, no doubt, from the Parrillada Villanueva Hotel know this lovely villa and discover the wonders that houses as Merza Waterfalls (popularly known as "a Fervenza da Toxa" ).

These fervenzas have an approximate drop of about 50 meters, and encuentrarn in a paradise, surrounded by trees, a large area next verde.Muy Merza and bordered by waters of Deza, located the Monastery of Carboeiro where architectural art is reflected in its foundations.
Formerly, in Roman times, the monks carried out the construction of bridges, as a sign of communication; to it it is because we find two bridges and two Romanesque arches worthy of thinking about Deza, in Merza.